The Singing Machine STVG785BTW karaoke machine is the perfect choice for younger people, although I honestly think adults would get a kick out of this cool little setup too (I know I did!). What makes this karaoke machine so cool? It comes with built-in disco lights! Nothing says “karaoke” like your very own private disco light show to accompany your awesome singing, and Singing Machine has obliged us quite thoroughly.

The disco lights are really just a bonus, though – this machine has every single other karaoke base covered too. From the top-loading disc player to the dual microphone inputs, to the auxiliary input and outputs, and finally to the built-in Bluetooth, you won’t find any missing features here. Let’s see what else the STVG785BTW has to offer!

"Our product reviews and recommendations are backed by decades of experience. You can buy confidently knowing these products have been put through the wringer by our seasoned team of musicians and writers alike." 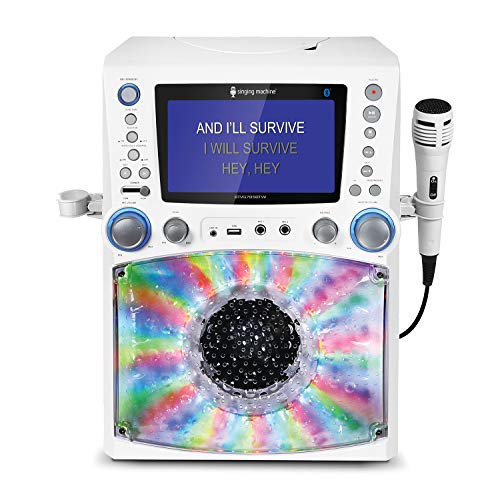 Like I mentioned above, you have a robust set of features to explore on the Singing Machine STVG785BTW unit. I’ll start from the very top of the product: Up first, we have a top-loading disc player. As is standard for most karaoke units, this player accepts just about any kind of disc out there. If you want your lyrics displayed up on a screen, you need to make sure you’re using CDG format discs, however. The “G” stands for graphics, or graphics-enabled, and that’s how the lyrics pop up in time with the music.

Speaking of CDG, Singing Machine was kind enough to include a demo disc for you! The karaoke setup ships with a CDG disc that has a decent selection of songs on it. However, I would definitely recommend picking up another disc while you’re at it. If CD’s aren’t really your style, fear not – The STVG785BTW is Bluetooth enabled, and also comes with a standard auxiliary input/output so you can hook your smartphone, iPod, iPhone, or MP3 player up exactly how you prefer to (you do need to provide your own aux cable, unfortunately). A lot of karaoke machines missed the Bluetooth memo, so it’s fantastic to see Bluetooth as an option with this unit.

The Singing Karaoke Machine does have a built-in speaker which does its job just fine, but I would definitely keep it hooked up to an external speaker system when possible for maximum sound quality.

To get the lyrics up on a TV, monitor, or another screen, the karaoke machine has standard RCA output jacks that plug right into just about every TV out there. It does ship with the RCA cable as well, along with a standard AC adapter to power the machine up.

As far as microphones go, the STVG785BTW ships with one microphone in tow. It does have a second microphone input built-in for easy duet singing without having to share a single microphone, but you’ll have to buy that second mic separately. You have a whole bunch of cool audio manipulation options available to you, including stand-alone controls for echo level, balance level, microphone volume level, and even an “auto voice control” knob that will automatically adjust the volume levels so you can distinguish between your vocals and the music. I really found these controls to be implemented quite well. I never really knew that I needed all of them when singing karaoke, but they truly enhanced the experience and were way too much fun to play around with.

I saved the best for last: As I mentioned before, the STVG785BTW comes with built-in disco lights! This is such an endearing finishing touch by Singing Machine. It goes to show they really know what people want when it comes to karaoke, and it’s always nice to see a manufacturer pay attention to the details like that. The lights jump to life as soon as you power up the machine, and I found myself grinning like a little kid the first time I saw them. You can imagine how big of a hit the lights are with an actual kid!

As a karaoke system goes, the Singing Machine is pretty portable indeed! As long as you remember that it does not have a built-in screen, and it does need a wall outlet to plug into, you can basically drop this unit into any existing audio or audio + visual system and be up and running with sweet, sweet karaoke in seconds. The whole unit weighs 7 pounds and measures 11 x 11 x 16 inches, so it’s quite easy to carry around – even for smaller children! My 6-year-old nephew had no issues picking it up and bringing it over to one of his friend’s birthday parties, which was great to see.

Again, it does require the AC adapter to power on – unfortunately, it’s not battery-powered, so you can only use it if there’s a wall outlet or generator nearby.

I would definitely classify this awesome little karaoke setup as extremely durable. It’s one of those products where everything just feels right. Singing Machine clearly didn’t skimp out on construction. The controls are all sturdy and smooth, and there are no rattling parts or poorly-manufactured aspects to the karaoke machine. I have no fear that this little guy will last for years without issue.

The STVG785BTW is about as versatile as karaoke machines can be. It does have a built-in screen which is awesome. It’s also a bit odd that the primary music input is just a CDG player, but that’s negated by the fact that you can hook up any audio device you want via Bluetooth or with a cheap 3.5mm auxiliary cable.

There aren’t many cons to the STVG785BTW, but here’s what I’ve noticed:

I’m a really big fan of the Singing Machine STVG785BTW karaoke machine! It doesn’t have the feature suite and functionality of a professional karaoke setup, but it’s absolutely perfect for families who enjoy karaoke, kids who like singing, and even for adult karaoke enthusiasts. Singing Machine did a bang-up job with this karaoke setup!