The Singing Machine SML283P Karaoke Player is one of the most portable setups I've been able to test out. It features a vertical load CDG Player, and comes with some pretty cool built in disc light effects. There are plenty of karaoke machines out there that manufacturers just slapped a handle on so they could be sold as “portable,” but this Singing Machine is the first unit I've tested that was clearly built with portability in mind from the start.

The delightfully pink color scheme (or the shiny black!) and tasteful disco lights make this karaoke machine the perfect choice for kids, teens, and families alike. And, with two microphone inputs, you'll find yourself singing your heart out in a duet before you know it! Let's see what else the SML-283P has to offer. 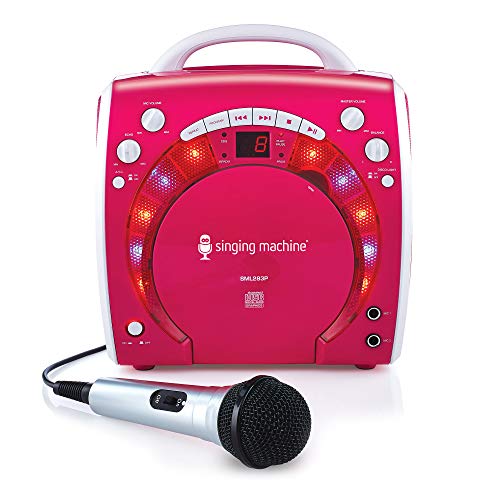 As karaoke machines go, the feature set of the Singing Machine unit is fairly sparse. This isn't a design oversight, though. This machine was clearly designed to be a portable karaoke setup. The manufacturer very smartly included only the features absolutely necessary for a well-functioning karaoke machine, but stripped out anything that would greatly hinder the unit's portability.

At the very top of the machine we have a built-in carrying handle. All you have to do is reach down, grab the handle, and you're ready to take this bad boy wherever you feel like. The unit does feature a vertical load CD player, which means you can load CDs into the machine from the side without having to reorient it. On the sides of the Singing Machine karaoke setup are built in speakers of average sound quality – no more, no less.

The Singing Machine comes with one microphone, and I was honestly pretty happy with the build quality and audio quality of the mic. There's an input jack for a second mic as well, but you'll have to buy that one on your own. I highly recommend doing so, as karaoke duets are one of the finer pleasures in life!

On the front of the SML-283P you'll see several well-places knobs and buttons. The karaoke machine boasts controls for the microphone volume, echo modulation, automatic voice control on one side, and controls for the master volume, audio balance levels, and disco light switch on the other. To control the disc player in the middle, you have the standard set of FF, RW, Play/Pause, and Stop controls, along with a digital screen that displays the current track number.

There are 4 LEDs surrounding the screen that notify you as to what controls are currently active. Finally, there's a master On/Off switch in one corner and two microphone input jacks in the other, along with an auxiliary jack in the back of the karaoke machine. Yup, that means you can plug your phones, mp3 players, and iPods directly into the karaoke machine and play your favorite music!

Like I said before, this thing is extremely portable. It weighs a piddling 3.8 pounds, and measure 10 x 4 x 9 inches. Anyone in the world could hoist this little box up with ease – you'll hardly even notice you're holding something when you move it around. The fact that it's tall and thin but boxy means you can easily slip it underneath seats, in between pieces of luggage, hidden behind furniture, or just about anywhere else you'd want to.

If you're worried about powering this little karaoke machine on the go, fear not! It ships with an AC adapter so you plug it into any standard wall outlet, but you can also operate it using 8 C batteries. This is the true mark of a portable karaoke machine – few setups are configured to run off of batteries, but the SML-283P does so with ease!

I won't lie to you, this portable karaoke machine does look cheap at first glance. Maybe it's the shiny plastic, but it comes off as a kids-looking machine. I was a bit skeptical until I actually got my hands on it. It won't astound you with it's rugged durability, but it's a very well-constructed machine. It is made largely out of plastic but everything is meticulously attached. The controls feel solid when you use them, and I haven't heard any rattling to date.

I don't think the Singing Machine would fare particularly well if you dropped it from any appreciable height, but pending that or similar damage I've found it holds up to normal wear and tear quite well. I eventually gave this one away to my cousin's 5 year old as a present and it's held it's own for years now. You know how rough little kids can be with their stuff, so that definitely says something about how durable this karaoke machine is.

Again, while the SML-283P doesn't lack versatility, it's not the most versatile karaoke setup out there. If you're looking for a machine that does it all – portable when you need it to be and fully integratable with a home system as well – you won't find that with the Singing Machine. But, if you're looking for one of the most portable, reliable, basic karaoke setups out there, you're in luck! The aux jack in the back is a very nice touch, however. It isn't enough to rely on a CD player these days, and the simple but useful aux jack ensures the karaoke set up can compete in the 21st century.

Personally, my unit was fantastic until I gave it away to my cousin's kid, and it continued being fantastic for the little girl as well! Everything felt reliable to me and I wasn't worried about breakage or under performance.

Even so, I will say it looks like Singing Machine may have a small quality control issue. There are a handful of users who've received bum setups from the start, or units that quickly blew out their power supplies, microphones, or CD players all too soon. The good news is that Singing Machine is both prompt and generous with their replacement units. If there's anything at all wrong with your SML-283P, you can send it right back and expect a replacement in a matter of days. This is a big deal to me, as good customer service from karaoke machine companies seems oddly hard to come by.

Overall, this machine met my expectations dead on. This is a welcome surprise when so many manufacturers out there try to cut costs at the price of product quality.

The Singing Machine SML-283P Karaoke Machine was built to be reliable and portable, and it is most definitely both. If you're looking for a more involved karaoke unit that can serve multiple purposes, you may want to look elsewhere. But, if you want a karaoke machine that won't break and that is wonderfully portable, you should definitely give the SML-283P some serious consideration! It's also honestly one of the best options out there for kids, teens, and families.