In some styles of music, particularly in Rock, it is not necessary to play all the notes of a chord. This can be quite effective in sound as well as ease of playing. The Power Chord requires the use of 2 or 3 notes to form the sound – the root note, an interval of a perfect 5th from the root note, and sometimes an octave doubling note. These are: 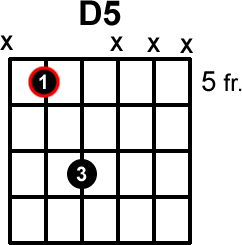 Because the 2nd note of a power chord is a perfect 5th, power chords can be notated 5. For example, G5 = G power chord.

The sound of the power chord is ‘tighter’ than a standard barre chord and is particularly effective played with a distortion effect in hard rock, punk, and heavy metal.

If you used a lot of distortion and tried to play a full barre chord, it will often sound messy and undefined. Power chords eliminates this.

Ok, but how do we play these?

Power chords are played simply with two fingers. Use the index finger for the root note and we recommend the third finger for the remaining notes. Unlike most chords it’s ok to use the flats of our fingers to play these. Since we’re only using the same two finger shape for all powerchords it’s easy to move around playing lot’s of different chords without changing shapes. Because just like barre chords we can move the shape around the neck at will.

When picking these chords we need to remember not to pick any strings we dont need too. We only need to strike two or three strings.