An arpeggio is a chord where the individual notes are played one after another in succession. The word ‘arpeggio’ means ‘in the manner of a harp’ in Italian. Arpeggios can be played using a plectrum as standard, or with the fingers (especially in classical guitar).

The lessons we’ve covered so far has everything you need to start playing arpeggios. For example, let’s look at a simple arpeggio played in C.

We take the C open chord:

The notes are then played in the following order:

In the example, the arpeggio is repeated backwards in a descending fashion back to the original C note.

We can also mix the order of the notes.

As long as only the notes from the C chord are played, they can be played in any order to form the overall sound. If you identify all the notes of the C chord, we can see that notes are composed of:

When mapped out over the open position of the fingerboard (i.e. at the low end of the neck where the open chords are usually played), we get the following arrangement: 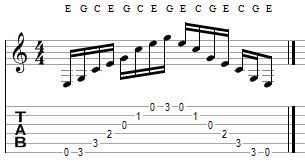 Using those notes a musician can form a strong melody to a song where a C chord would usually be played. This is a trick used my many song writers and often heard in acoustic and vocal pieces. Playing an arpeggio instead of strumming the chord can add a whole new layer and texture to the song. Other notes can be added to the arpeggio, but overall, the melody is strengthened if the bulk of the notes match the sound of the chord.

Another way of practising the arpeggio is to start on the root note, then descend to the lowest note on the 6 th string, before ascending across the strings and back again.

Tip : A rule-of-thumb, when using arpeggios in an improvisation, is to start on the root note of the chord. Not all musicians do this, and it’s usually out of preference, but starting on a root note can strengthen the melody during key changes of the song.

Here are some more examples of simple arpeggios for a few other open chord positions. These should give you an idea of how easy it is to play your own arpeggios freely.

In this example we’re skipping strings often. When playing arpeggios don’t feel like you need to play one string after another.

Often when playing arpeggios we start the arpeggio with the root note of that chord. In this example each bar starts with a D note since the chord is D major. This helps the arpeggio retain more character of its parent chord.

In this example we’re again starting each bar with a G note, since the chord we are turning in to an arpeggio is a G major.

This example in E major is a bit different from the other examples as we’re starting on the high strings and descending to the lower strings in the first bar. Although arpeggios are often started on the lower strings feel free to start higher.

Hopefully you’ll be able to see how easy it is to make an arpeggio from any chord you know how to play. This should really add another dimension to your music!