Pinch harmonics are those loud squealing notes produced from a distorted or overdriven guitar. Although it is possible to play pinch harmonics on an acoustic guitar, they are famously associated with loud rocking electric guitars!

Pinch harmonics have a loud over the top, in your face effect. A perfect tool for any aspiring rocker.

When we come across Pinch harmonics in tab, it will look something like this.

Listen to that example above to hear the difference between those regular notes and pinch harmonics.

So how exactly do we play these pinch harmonics?

The first thing we need, is a generous amount of overdrive or distortion. You don’t need face melting levels of gain, but a healthy amount is required to really make it squeal! Secondly make sure your guitar’s volume is set to max. The more output from your guitar the better. The stronger the output of your guitar’s pickups the easier it will make it, although super hot pickups aren’t essential. And thirdly we come to the actual technique we need to use.

Basically what we need to do, is to hit the note with our pick, and to very briefly graze the string with a piece of your thumb or finger. The string grazing against our flesh will transform the normal note, into a howling, squealing banshee! Why does this happen? We haven’t the faintest idea! You’ll have to ask a physicist.

Right so we pick the note with our pick, and then graze some part of our skin on the string. Easy to say, very hard to do.  When I first came across pinch harmonics, I understood what I needed to do, but couldn’t figure out exactly how in world I was supposed to actually pull it off physically. The main problem was getting my finger to graze the string fast enough. If you touch the string too late, or too hard, or too soft it just kills the note. After much experimenting I finally found a way to play pinch harmonics almost every time I call for them. And I thought to myself, wouldn’t it have been cool if someone told me exactly what to do from the start, instead of that lame, little one sentence explanation given by every source.

Well, that’s what we’re going to try to do. You may find later that you prefer another method. But in our experience this is the quickest and easiest method to playing pinch harmonics. And it’s a simple trick involving how you hold your pick.

Instead of holding the pick, so that it hits the string flat. Bend your thumb so that it cuts through the string at an angle. With your thumb bent in this way, the string when it vibrates, will automatically bump into your thumb. As soon as you feel firm contact of the string brush your thumb, pull your thumb away so you don’t kill the note.

Notice how the thumb when bent in this way it is in an ideal position to follow through and brush the string after it’s been hit by the pick When you strike the string, really dig into it to make sure your thumb gets close enough. Hit it harder than you would normally.

If you come across a certain note or fret that refuses to pinch harmonic, try moving the pick closer or further away from the bridge. Some can be quite stubborn and require them to picked on a precise sweet spot on the strings length.

When it boils down to it, it may take some experimentation on your behalf. However the best platform to start is to use the above method of holding the pick. And take it from there.

For something a bit more fun, here is an example of how pinch harmonics might be used within music.

Another common use of pinch harmonics is to bend them. This will really make them squeal! Here is an example. 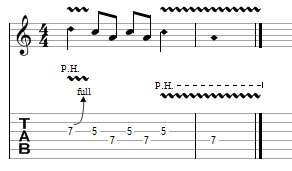 These two examples should give you ideas on the use of pinch harmonics. However you may decide you don’t like the sound of them, and there’s nothing wrong with not using something if you don’t like them. Some guitarists find them obnoxious and tasteless. Personally I think they’re fantastic!

Have fun! Or ignore them if you hate that sound!