Harmonizing is when you play more than one note at the same time that sound good together. The simplest form of harmonising is where two instruments play the same thing at the same time. Chances are you’ve probably already done this with a friend. And you would of noticed, that despite both playing the same thing, it adds a nice effect to the playing that you wouldn’t get if it was being played alone.

But lets focus on more exciting forms of harmonizing. The two most common and popular are octaves and thirds. Let’s have a look at an example.

Have a look at the first bar. We’ve got a simple passage going up one octave in a C major scale. So the notes are,

In this first bar we are just playing this simple passage on its own. The next two bars we’re going to keep playing the same little run again, only we’re also going to harmonize with it. That vertical line joining the two bits of tablature tells us there supposed to be played at the same time, by two different people. Have a listen and hear how the harmonizing effects the sound. It really lifts it above the norm and adds another dimension.

Before we explain exactly what is going on and how we got there, try playing it for yourself. Chances are you don’t have a guitar playing friend who just happens to be with you at this time, so here is a sound example with the harmony taken out so you can try playing the harmony parts on top of the basic lick.

Now let’s see what is happening. In the second bar we are harmonizing in thirds. We take whatever note we are playing and then count up two notes in that scale. The note we’ve counted to is the note that is played with the original note.

Important: We count two notes in that scale, NOT TWO-SEMI TONES.

Interestingly, that harmony part we’ve ended up with, is actually E dorian mode! How intriguing! Two totally different scales, but when you put one on top of the other it sounds great. Isn’t music interesting and wonderful! It works because even though we are in effect playing a different scale, because the notes are the same (but in different order) it doesn’t sound out of key.

You may be wondering why this is called harmonizing in thirds. Since we’re counting up two notes not three. Well it’s called thirds because if you know your intervals, (which you should!) each of the harmony notes is either a minor third or major third. For a quick refresh in case you’ve forgotten, a minor third is the same as three semi-tones, and a major third is the same as four semi-tones. You can check for yourself and you’ll see its true.

Right so we’ve explained what’s happened in that second bar. And you’ll be glad to know that what’s happening in the third bar of that example, is very simple. You’ve probably worked it out yourself. As we mentioned before, the harmony in that third bar is in octaves. All we’re doing is playing the same thing again, but an octave higher. In this example we’ve just moved it all up 12 frets. Simple!

In the example above we started with a Major scale and harmonized with it. Out of interest let’s have a look at harmonizing a minor scale.

Let’s play a harmony to this in thirds. So let’s count up two notes for each of those notes, sticking in A minor of course. What we end up with is this,

In the second bar of this example we’re going to play the harmony part on its own just too demonstrate that it is in fact C major.  And in the third bar we’re going to put them on top of each other. To show how well they work together, despite being different. Have a listen.

Sometimes we may want to harmonize on our own. Maybe you’re the only guitarist in your band for example. Sometimes it’s possible to play a harmony on just one guitar if we re-arrange the notes, in way we can play. Let’s take a look at an example.

It’s the same old C major scale again. This time we’re going to move up an octave across one string. And we’re going to harmonize in thirds. However we will see that all these harmony notes are playable on the ‘D’ string. And if we look at this example we can see it’s very easy to play this on one guitar, by yourself. Have a listen and try it out. You’ll hear it still has the same harmonizing effect and sound even though you’re playing it on your own.

Another thing to watch out for is bending while harmonizing. When we bend up notes, the notes we bend up to also need the correct harmony note. Let’s look at an example and have a listen. 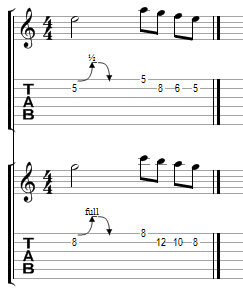 The top lick is played in C major and is harmonized in thirds. Notice that the first bend is ½ step bend on the main part, and a full bend on the harmony part.

Now let’s look at the harmony part. Harmonizing in thirds, the harmony note for that ‘E’ is a ‘G’. So we play the ‘G’ first of all. Now we need to bend the note. Since the in the main part we bent that note up to a ‘F’ note, we need to harmonize that ‘F’ note also. And harmonizing in thirds, the harmony note for that ‘F’ will be a ‘A’ note. So to harmonize that first part with the bend, we’re going to have to play a ‘G’ note and then bend it up to a ‘A’ note. That requires a full tone bend.

So you can see from this example, that while the main part required only a ½ step bend, the correct harmony part required a whole full bend. Just something to watch out for if you plan on bending while harmonizing.

Some guitarists like to harmonize using fixed steps. Instead of counting up notes in a scale, they instead count up notes using fixed semi-tones. In other words they may play a passage, and harmonize it with the exact same thing, only moved up or back a few frets. This sometimes can produce a evil, dissonant sound. Bands like Slayer do this type of harmonizing sometimes.

So even though harmonizing in thirds, and sticking to those rules will produce great results. Don’t be afraid to try something different. There’s no right or wrong, only what you think sounds good or not.