A piece of music often has distinguishable beats that people tend to tap their feet to. The sounds on sheet music are expressed by different note symbols depending on the beat length. This is also known as the time value.

Standard beats are known as crotchets, or quarter notes, which are shown like this:

A quarter note lasts for one quarter of the bar. When you tap your foot, or nod your head along to music, most likely you are moving along with the music in time with quarter notes, even if the music is being played with other types of notes.

A sound lasting as long as two crotchets is known as a minim, or half note, and is shown like this:

A sound lasting as long as four crotchets is known as a semibreve, or whole note, and is shown like this:

There are also notes that are shorter than a crotchet. A sound lasting half as long as a crotchet is known as a quaver, or an eighth note, and is shown like this:

A sound lasting a quarter of the length of a crotchet is known as a semiquaver, or a sixteenth note, and is shown like this:

In these examples we’ve shown each type of note in a bar on it’s own, filling up the whole bar. But in music naturally we have different length notes mixed together. For example we can have two crotchets (quarter notes), followed by one minin(a half note). Two quarters and a one half adds up to one. This will fill up one bar.

The semibreve and minim rests look similar but they sit differently on the stave. The semibreve rest hangs underneath the 4th line. The minim rest sits on top of the middle line.

If we leave gaps in notation without placing a note or a rest, then the bar will be incomplete. People reading notation wont assume a blank space is a rest.

Beats in music flow in groups. Each group of beats can be separated into separate bars (sometimes called measures) in music notation. Each bar typically has two, three, or four beats, with the first beat of each bar being felt a little stronger than the rest. Each bar is separated by vertical bar lines. From a musician’s point of view, the use of bars effectively breaks down a long sheet of music into manageable chunks.

At the beginning of the music notation there is a time signature to specify how many beats are in each bar. A typical time signature is [4/4]. The top number specifies the number of beats there will be in a bar, whereas the bottom number specifies the type of beats they will be. In this case, the [4/4] time signature indicates that there will be 4 crotchet beats per bar. Or in other words there are 4 beats in the bar, and each one lasts a quarter of the bar. The [4/4] time signature is the most common one, such that the notation is often replaced by the symbol c, which is often called common time. The vast majority of western music is played in common time. And subconsciously your mind is most probably attuned to this timing. When you write your own music, without thinking about it, it will most probably be in common time.

If you’re playing music and you have that urge or feeling that you need to hit one more note, or play just that bit longer to feel like the piece is complete. It’s because the bar isn’t finished and your mind needs to complete the bar to feel satisfied.

You will have noticed the 4/4 at the beginning of the other examples also.

For the scope of this course, we will mainly have lesson examples in 4/4 notation to keep things simple.

At the end of each piece, there is always a double bar line as you can see from the previous examples.

The lines of music notation are known as the stave, or staff. The stave consists of 5 lines and 4 spaces, and each line or space represents a note.

The lines and spaces are counted from the bottom up, and each note either sits on a line or within a space.

A clef is used to determine the arrangement of notes on the stave. The two most common clefs are the treble clef (used for higher notes) and the bass clef (used for the lower notes). As a guitarist, you will only need to know the treble clef, sometimes known as a G clef, presumably because it looks like a G(or it is actually supposed to be a  G!). That squiggle at the start of each of the previous examples is an treble clef.

A bass clef looks like this. Instead of that G shaped squiggle we have something that looks like a ear lobe.

The notes of a treble clef

Here are the names of notes of each line and space represented by the treble clef:

All notes, except for the semibreve, consist of a note-head and stem. Quavers and semiquavers also have flags at the end of their stems. A quaver has one flag, and a semiquaver has two flags. The flag of a stem is also called a tail. The position of the note-head determines the name of the note.

Sometimes a note may be positioned higher or lower than the stave would normally hold. Ledger lines are added below or above to support these notes.

This example shows the low E open string of your guitar.

Notice that ledger lines do not join up with adjacent notes and are always separate.

Note: Semitones and tones can ascend or descend on a fingerboard, and only describes the distance between two notes. For a full list of the intervals and their names check out the dedicated lesson on intervals. Knowing your intervals is particularly important for knowing how to build chords and work out keys.

An accidental applies to all repetitions of the note in the remainder of the bar.

Accidentals can be displayed in two ways:

A sharp symbol raises a note by a semitone. In tablature, the note is raised by 1 fret.

In this example a D note is followed by a D sharp note. In the notation a sharp symbol is placed next to the D note, it looks like a hash symbol ‘#’. In the tablature we can see we’ve moved up one semitone, or one fret from the 7th fret to the 8th.

A flat symbol lowers a note by a semitone. In tablature, the note is lowered by 1 fret.

In this example a B note is followed by a B flat note. The flat symbol looks like the letter ‘b’.

A natural symbol restores a note back to its natural state. In tablature, the note is lowered by 1 fret to its original fret. (Note: if the note was previously a flat, then the natural would have raised the note by 1 fret instead)

In this example a D sharp note is lowered back to a D natural. The natural symbol looks like a square with two bits sticking out the ends. You may wonder why it is required to have a natural symbol. After all if we don’t use a flat or sharp symbol it must be natural by default right? Why do we need another symbol?

In music, a scale is a set of notes that form the foundation of a song’s key. Different songs have different moods or feels, and the secret is to do with the choice of scale used in the song. A scale can determine whether a song sounds happy or sad. It can also give a song either a European or Far Eastern feel, for example.

The Major scale consists of a set of notes separated by 7 intervals consisting of whole and half steps.

The intervals for the Major scale are as follows:

Notice the C major scale contains no sharps or flats.

The degrees of a scale

The notes of a scale are also ordered in degrees. This is simply giving each note of the scale a number in ascending order:

Sometimes you may notice the term “degree” being omitted in texts and conversations. For example, “The 4th degree in the C major scale” can be expressed as “The 4th in C major”. They both mean the same thing and the latter is just a shortened (and commonly accepted) method.

A piece of music constructed around a scale is said to be in the key of that scale. The first note of the scale is known as the keynote of the music. The following diagram is a short melody in the key of A major, with accidentals to identify the notes of the A major scale:

A more efficient method of writing this is to group all the accidentals together in a key signature at the beginning of the music. The key signature identifies the underlining scale of the song. The following diagram is the same melody as above, but with the key signature inserted:

As you can see, this should allow the musician to easily identify the key of the music by checking the key signature, and then be able to immediately eliminate the notes that probably won’t be used. We say ‘probably’, because sometimes a piece of music can contain a few notes that are not part of the scale. Unfortunately, there isn’t a method of predicting what these extra notes might be from just glancing at the sheet music, but we do know that the key signature will give the musician a general idea of the bulk of the notes that are used in the composition. A key signature will apply for the rest of the music unless cancelled or changed by another key signature later on. 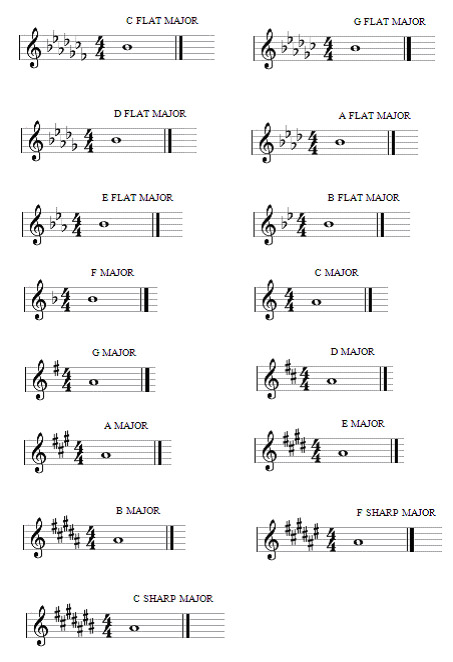 Each key signature pattern has two different keys; a major, and its relative minor. When we look a piece of sheet music, we can usually work out the exact key of the piece by checking the final chord of a song. For example, if you see a piece of sheet music with two sharps in the key signature, we know that it can either be in the key of D major or B minor. If the last chord is a D major, we will know that the song was written in D major.

To recap, we have learnt that a major scale and its relative minor scale share exactly the same notes. Therefore, using the scale degrees rule, we know that the 6th degree of a scale is the keynote of its relative minor.

For example, let’s work out the relative minor from the key signature for C major. We know that the notes of the C major scale are:

The 6th degree of the scale is an A. Therefore, we can deduce that the relative minor of the C major key signature is in A minor.

Let’s look at another example. Say, we know that a key signature (with 3 sharps) is in A major. By taking the 6th degree of the A major scale, we get an F#.

Therefore, we can say that the relative minor of the A major key signature is in F# minor.