We all know you don't have to be a top-notch singer to enjoy karaoke. It's an activity that attracts even the most meager talents among us, not least because it encourages folks to make complete fools of themselves, and to enjoy themselves while doing it. Yet, despite the pleasure of butchering beloved songs in front of friends, it's sometimes nice to imagine how much more fun singing might be if we could actually wow our audiences (and ourselves) with a flawless vocal performance.

Perhaps you've wondered: what if there were actually a karaoke machine that could make anybody and everybody sound like a seasoned professional? You may be surprised to learn that such a machine exists—well, just about—and that it's actually pretty affordable. It's called the Electrohome EAKAR300, and it's a proven hit among its users. Karaoke experts have lavished the EAKAR300 with ample praise, singling it out as one of the better-equipped units in its price range. It's very user-friendly, lightweight, and easily transportable, which makes it a great buy for families (especially those with young children and teenagers) and casual karaoke enthusiasts.

Beyond the basics, though, its attractive selection of vocal control features is its biggest draw. Do you ever worry you might forget the words to your favorite song while performing, or stray horribly off key? Not to worry—you'll be pleasantly surprised at some of the handy tricks the Electrohome's got up its sleeve. 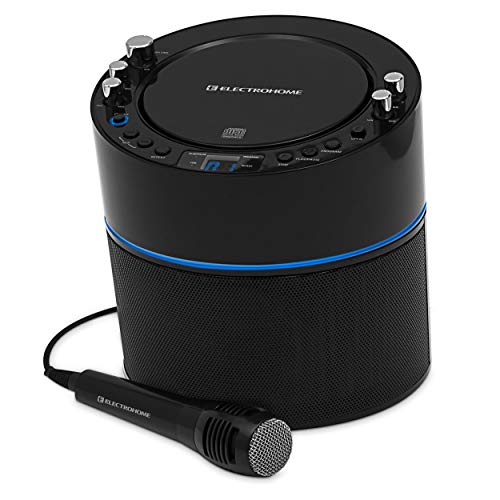 The Electrohome EAKAR300 offers virtually all the standard features you'd expect for a karaoke machine. Its built-in CD player is CD+G compatible—that is, it can read CDs that come encoded with graphics, like on-screen lyrics—and it also works well with both CD-R and CD-RW discs. In fact, the system includes a CD+G packed with today's “popular karaoke hits” to get you started. If you'd rather use tracks stored on an electronic device, there's a 3.5mm auxiliary input jack that's compatible with just about every smartphone, tablet, or MP3 player.

Further, the two-jack microphone input makes this system great for singing duets. (Keep in mind, though, the product only ships with one mic and does not include an aux-input cord, so you'll need to purchase the second mic and the cord.) To round out the full karaoke experience, use the included RCA cable to connect the machine to your TV or computer. There's no long, drawn-out setup process. This unit is ready to use almost as soon as you take it out of the box.

The EAKAR300 supplements these basic features with a few more special add-ons that make this unit more than worth its price. For starters, it's incredibly compact. Cylindrical in shape, the sleek 8.1” x 8.9” x 9.8” unit weighs less than five pounds. It practically begs to be dropped into a bag and smuggled into every party you attend. It is worth noting, however, that there is no built in screen. If you're bringing this awesome machine along with you, make sure there's a TV or monitor you can plug it into. Unless you're a pro who doesn't need the lyrics up on screen, that is!

From a durability standpoint, the Electrohome EAKAR300 pleasantly surprised me! The whole thing just feels sturdy to the touch. There aren't any parts that seem like they'll fall off anytime soon - even when well-used - and I'm confident this nifty little machine will last me quite some time.

The system's real magic lies in its voice control capabilities. These features are a real stand-out, especially for a unit intended for casual use. The system's Auto Voice Control is a great safety net for those who might avoid singing because they're worried about sounding out of tune or blanking on lyrics in the heat of the moment.

Auto Voice Control is designed to sense when you pause during your performance, at which time it swoops in with a lead vocal line to help you get back on track. (Be aware that this wonderful feature only works with multiplex discs, which are specially made for use in karaoke machines. If you decide to use your own backing tracks, you're on your own! And if there's any further doubt, Balance and Echo Control can help add a studio-quality sheen to even the roughest of voices. With options like this, your friends and family will have little excuse to pass up a round of singing.

Though these features alone make the Electrohome EAKAR300 an exciting buy, you can guess that such a small machine can only do so much. Reviewers frequently mention the system's limited power-source options as one of its drawbacks, although I haven't really noticed this in practice. Despite its portability, the Electrohome cannot be battery powered, so be sure to have the power cord with you when you travel. This was not a super big drawback for me as I don't really bring the machine around with me much, but it's something to keep in mind if you were looking for a more portable karaoke setup. That being said, this is still an extremely portable system as long as there's an available outlet wherever you're headed. The system's product description lists “an electrifying blue party light” as one of the unit's big draws, but the thin color strip functions more as a design accent than a fully fledged to-go light show.

As might be expected, the unit's built-in speakers aren't exactly an audiophile's dream. While users offer a whole range of opinions about the Electrohome's sound quality, most agree that the machine maintains a pretty moderate volume even at its extremes (though one user reported extremely loud volume at the upper end, so be careful!). Similar things were said of the microphone, which produced a thin sound for some users. These observations suggest that the EAKAR300 may be best suited for use in small crowds rather than large gatherings. Lastly, you'll need to have a phone or camera on hand if you want to capture an especially memorable performance—this unit isn't equipped with recording or playback capabilities.

Overall, the Electrohome EAKAR300 packs quite a punch for a unit of its caliber. It's small and easy to use, which makes it a great first buy for children, teenagers, or other folks who want an affordable, convenient option for occasional in-home karaoke singing. The vocal enhancement features, particularly Auto Voice Control, act as a great confidence-booster and singing coach.

The microphone and speakers' sound quality may pale in comparison to that of more professional-grade machines, but this system is an excellent choice for those in search of an affordable, no-fuss setup. What's more, it comes with a one-year warranty just in case you run into any problems. So the next time you decide to throw a party, go ahead and throw the Electrohome into the mix. You can assure even your shyest guests that this machine will make them sound like superstars.