A Touching Update on Glen From a Campbell Family Friend

I visited my friend Glen Campbell Wednesday in Nashville. Laura and Kim Campbell were there as well. You may be aware that Glen has bravely been living with Alzheimer’s Disease. Along with his strong and courageous wife, they have changed the face of Alzheimer’s forever. The world watched as Glen traveled from city to city, to continue doing what he loves to do: perform and share his music. Doctors were amazed at how the music and activity appeared to slow the pace of the disease for awhile. With his family, they showed the world that you don’t have to hide when you become ill. They raised awareness, and in turn, funds for Alzheimer’s research.

Glen is currently residing in a memory support community—it reminded me of one of the nice hotels he would stay at while on tour. Kim has found this place for Glen that is safe, where he is cared for 24 hours a day. The ratio of caregivers to residents astounded me–he is never alone. And there are only 17 other residents; his neighbors are former lawyers, doctors, teachers and others who are living with the same challenges that dementia brings. Glen has been my friend for a long time and I love him like a brother. I am sure that Kim has made the right choices for and with my friend of 50 years.

Glen has his private room and bathroom, all decorated by Kim with custom paint, lots of photos murals and framed memorabilia. The place is bright and clean. He loves color and still wears his blue suede shoes from time to time! The memory center has elaborate arrangements for activities. There are many different rooms and spaces for him to experience each day, each furnished tastefully and safely.

There is an airy screened-in porch where Glen likes to sit and where we visited with him. He has a full time care-er, Brody. Brody is in his early twenties with long blond hair–he looks like a surfer! Brody is patient and kind. He plays the guitar with and for Glen. They sing, they walk around the grounds and converse almost constantly. We instantly fell for Brody and thanked him for the care he gives to Glen and the important breaks he gives Kim so she can rest and work.

Glen has always been a happy guy and a jokester. He still is. For longer than I’d like to remember, he has imitated Donald Duck and during the visit, he did his Donald voice for us. He sings in a low register all the way to high clear notes that are reminiscent of the performances we are all familiar with. He seems almost to go from song to song, under his breath at times. He looked at me after singing one song and said, “that was a good song wasn’t it?” Music is still at the very center of who he is. It is almost as though he is giving a never-ending performance.

The last thing he said to me when it was time for us to go was, “Was it a good one?” like he used to say to me at the end of a concert. That phrase made me think that he recognized me, that and the fact that he said my name to Kim and Laura when I left the room briefly.

He sees his family all of the time; Kim and two of his younger children live just a few minutes away. And his oldest daughter Debby was visiting just the day before.

He is loved. He is cared for. He is respected. And most of all, he has his dignity. We can all be comforted by that. 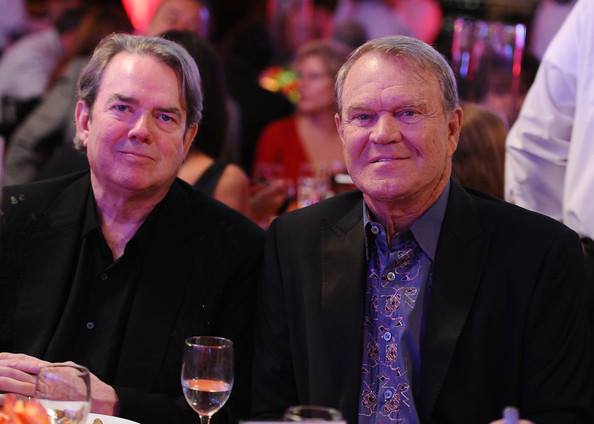 GLEN CAMPBELL’S “GHOST ON THE CANVAS” – IN STORES & ONLINE EVERYWHERE!!